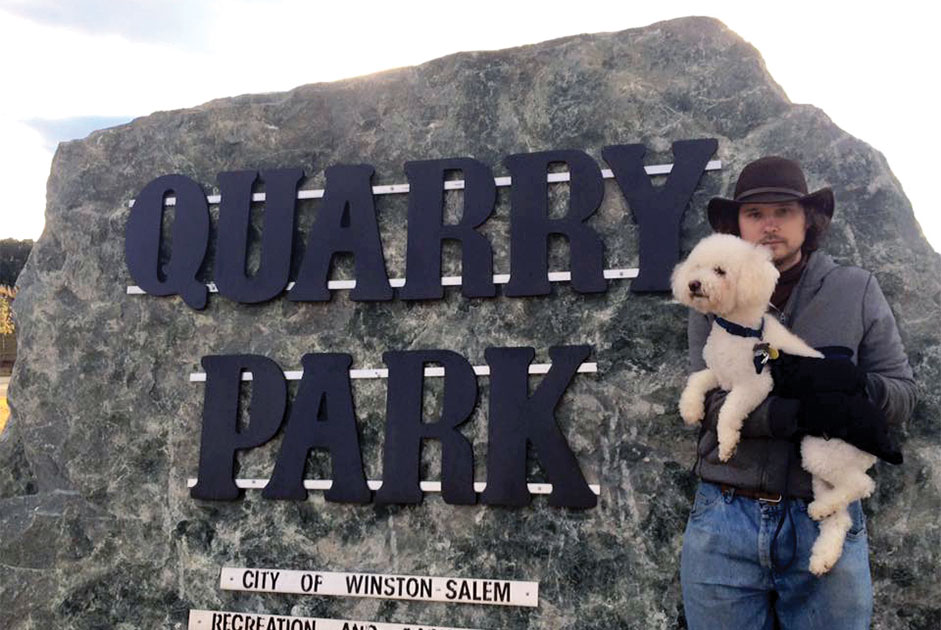 One day I drove down a random avenue looking for an environmentally beautiful retreat, somewhere to ponder my woes.   With my Bichon Frise, Jackson, and my bookish Civil War historian son in tow, I ended up on 1790 Quarry Road and discovered, by sheer accident, an unaccountably beautiful lake with an adjoining shimmering landscape, punctuated by numerous trees and braces of wild flowers.  That evening I found a place which has become my sanctuary, which has become sacred, and where I look closely at things, large and small, and note the color of the sky as it moves towards nightfall.  Virginia Woolf once wrote that, “A woman must have money and a room of her own if she is to write fiction.”  I haven’t had much luck with the money part, but I have found it essential to have some sort of private and personal space where creative juices can flow.  Quarry Park is this aesthetic oasis for me and an event, not simply a location, which I urge others to visit.  Located in the southeastern part of Winston-Salem, it can serve as a recreational and spiritual resource for the city, as well as a cultural asset.  The quarry is located in close proximity to Winston-Salem State University and UNC School of the Arts, and only a short distance from the downtown central business district.  I did a bit of research and discovered that, at one time, indigenous peoples like the Cherokee, Saura and the Keyauwee, lived in the area until their forced removal in the 1830s under President Andrew Jackson.  At some point during the mid-1920s to 1970s, Vulcan Materials Company operated a quarry (known as Piedmont Quarry) on approximately 228.2 acres, mining and producing rock aggregates.  A large amount of those products eventually went to the construction of the Interstate Business 40 highway project, the Westinghouse Turbine Plant, Stroh’s Brewery, and the construction of Winston-Salem State University.  In 1997, the property in its entirety (1 larger and 1 smaller quarry) was donated to the City. The larger quarry, with its water 200-300 feet deep, seems to have a life of its own, teeming with freshwater jellyfish and other life in its crystal clear environs, but also boasting a surreal view from its topmost hilly exposures from which well-known city buildings can also be seen. Quarry Park is a place where I get religious.  I feel the footprint of the Creator here in the gorgeousness of the area, the serenity of the atmosphere, and the quality of the light.  Up in these hills, standing behind the metal fence surrounding the perimeter of the quarry and the lake at its base (for safety of visitors and safekeeping of the environment), you feel the living animation of this nature scape, in its waters, grasses and trees. I am grateful to have stumbled upon the divine architecture here and it is where I say my prayers, for my family, the world, my beloved dog, too, quietly lying at my feet, and where I am encouraged to shape and promote an attitude of reverence for all life.  Each of us needs a spiritual refuge to practice the acts of gratitude in an increasingly beleaguered and set-upon world.  There are so many things I need to talk to God about, and in this beautiful domain I have found a wonderful habitat to do so.

Quarry Park has undeniably kindled in me an eye that looks more intensively and appreciatively upon nature’s treasures and allows a quiet moment of reverie. My son, always bent in the direction of elucidating history, informs me that in the late 1990s, the quarry was featured in an independent film called “The Lesser Evil,” and we vow to find it and watch it. He goes on to tell me that the Indigenous peoples originally inhabiting this area interacted with the Moravians during the late 1700s and early 1800s, but were forcibly removed under the federal Indian Removal Act, causing them unconscionable pain and unwanted displacement.   I am listening, but I am also busy acknowledging the power of the sacred here, the moments on this soil, whether they be miraculous or mundane, and observing the tiniest details, patterns and geometries that are everywhere apparent, waterfowl alighting on the lake, a colony of mushrooms pushing forth their heads in the grass, a wild hare running for cover.  I put my ego and its measures of self-worth away before this profound expanse of beauty gracing the park and lake.  This place in nature is the equivalent to the “room of my own” Wolfe spoke of, where I can put aside my catastrophizing, sundry griefs, and troubles and practice a ritual of necessary gratitude and prayer, for the red-tailed hawk circling overhead and the cumulus clouds gathering in the darkening sky.  I invite every reader to visit Quarry Park and see why Gregory James, with the Winston-Salem Parks & Recreation Service, told me “It is a hidden gem of Winston-Salem.”

Content for this article has been contributed by an outside party or advertiser. Inclusion in Forsyth Woman and/or Forsyth Family Magazines does not imply endorsement of products or people. The views of the authors are presented for information and entertainment only, and may not necessarily reflect the views of Forsyth Woman and/or Forsyth Family.
View More Articles
PrevPrevious ArticleThe Sweet Spot: Baked Just SO in Winston-Salem
Next ArticleHolding On and Letting GoNext