B.F. Huntley: The Story behind the Furniture Tycoon of Winston-Salem When it comes to recalling industrial businessmen and innovators in Winston-Salem’s history, the name R.J. Reynolds usually comes to mind. R.J. Reynolds is well-known for his business savvy skills and for building the R.J. Reynolds Tobacco Company, which created Camel cigarettes, the first nationally popular cigarette in the United States. However, Mr. Reynolds is just one of the many men who have helped put Winston-Salem on the map.

“He is an industrial revolution success story that not many people know about. He wasn’t showy and did what he could to contribute to the community,” said Christy Cox Spencer. Spencer’s husband Will is the great grandson of B.F. Huntley. Together, the couple is on the mission to preserve Mr. Huntley’s story in the history of Camel City and in North Carolina. “We know the big names of people in our town’s history, but we don’t know all of the big names. B.F. Huntley is one of those big names that many people don’t know about.” Born in 1863, Benjamin F. Huntley (B.F. Huntley), lost an arm in a cotton gin accident at the age of 19. He worked odd jobs in Virginia and in his home state of South Carolina until he landed in Winston-Salem in 1890. He started his career in the furniture industry as a traveling salesman for a furniture company in High Point. Eight years later, the Oakland Manufacturing Company was created between a partnership with Mr. Huntley, William P. Hill, and Madison D. Stockton. In 1906, the Oakland Manufacturing Company bought out the Winston Furniture Company, leading to the formation of the B.F. Huntley Furniture Company. After that, the company grew to become one of the largest bedroom and dining room furniture manufacturers in the US. In fact, the company included R.J. Reynolds as one of the stockholders. During the company’s years in business, it saw great success and had doubled in size by 1920. Factories were built in what is now downtown Winston-Salem, one located on the corner of Patterson Avenue and 12th Street. In 1961, the B.F. Huntley Furniture Company ended its operations and was bought out by Thomasville Furniture Industries.

“Mr. Huntley was an entrepreneur at his core, but also gave back to the community in various ways. During his life, there were no personal taxes to pay, so a majority of his wealth was used to buy property, homes, and land. In fact, the homes near his plants belonged to the hundreds of employees in his company.”

B.F. Huntley served on many committees and was active in the Baptist church. He donated the land to the NC Baptist Convention for them to build their hospital in Winston-Salem. This hospital soon became known as Baptist Hospital. In addition, Mr. Huntley became one of the first directors of the North Carolina Baptist Hospitals, Inc., and was a chairman of the hospital building committee.

“Mr. Huntley lived in what is now known as downtown Winston-Salem and invested in that area. He gave land to build the nursing school at Baptist Hospital. His farmland was located in the current Sherwood Forest area and he gave that land away for building different projects.”

He also participated in the building committee for First Baptist Church on West Fifth Street and was a trustee for Meredith College. Lastly, another of his numerous roles was president of the Winston-Salem Hotel Company who was owner of the Robert E. Lee hotel.

B.F. Huntley passed away in 1925 leaving behind a wife and children. Just a year before, in 1924, Mr. Huntley and his wife created their own version of the Reynolda House on 2900 Country Club Road. White stucco in a Georgian Revival style with a green tile roof was designed and landscaped by Charles Barton Keen and Thomas Sears, two people who also participated in the building of the Reynolda House.

Since his passing, Mr. Huntley’s daughter, Kathleen Huntley Spencer (Will Spencer’s grandmother), has been honoring his story and mark on Winston-Salem. Spencer and his wife, Christy, have continued on that mission. A historical marker has been placed to commemorate the site of his factory and the couple has also opened an Airbnb, The Huntley House, at Robert Hall in downtown Winston-Salem. They are also taking part in the revitalization of the Industry Hill neighborhood where Mr. Huntley’s old plant used to sit. In all of their endeavors, they are keeping B.F. Huntley’s entrepreneurial spirit and giving at its core, as well as his memorable stories, such as the time Mr. Huntley met Thomas Edison, Henry Ford, and Harvey Firestone.

“It wasn’t planned at all for them to meet. Mr. Edison, Mr. Ford, and Mr. Firestone were on a roadtrip through the Piedmont and had car trouble near Winston-Salem. Someone picked them up and brought them to Forsyth Country Club. While they were on their way, a welcoming party and luncheon were organized. It just so happens that Mr. Huntley was a part of that welcoming committee. He was at the right place at the right moment” said Spencer.

Thanks to his family’s efforts, the name B.F. Huntley will forever be cemented in the history of Winston-Salem and North Carolina. 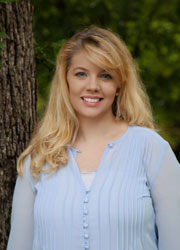 Forsyth Magazines writer since 2015. Born in Texas, Megan was brought to North Carolina when she was only two months old. A recent graduate from Salem College, Megan has a degree in communication with a minor in history. She has a toy poodle named Gidget and, in her spare time, she loves cooking, music, reading and travel. Megan has also spent time in film, having appeared in two movies – an independent production and as an extra in studio film. “I love listening to an interviewee’s story and then sharing it with the community. Everyone has a story to tell, and I’m glad I can be a part of it,” said Megan.
View More Articles
PrevPrevious ArticleWhat My Fur Babies Taught Me about Winter
Next ArticleMillions of MilksNext