Confessions of an Ex-People Pleaser Confessions of an Ex-People Pleaser

I was a people-pleaser for most of my life and it wasn’t a good thing.

You’re probably thinking, Oh Jen! You just made people happy and helped them out!

I wish it stopped there.

I had such a low opinion of myself and felt I had to make everyone around me happy for them to like me. You know that friend that goes along with everything and doesn’t have a personal opinion – the one that just rolls with it the entire time? That was me: I was constantly just saying yes to make sure people liked me.

This led to some pretty terrible situations – one ending in a divorce.

I still remember when the guy at the front desk started talking to me: I just started working at the Holiday Inn as a bartender and my first day was 9/11. We were talking and I liked the attention more than anything else – the guy was nice enough, but I know I appreciated that someone liked me more than anything else.

When we were hanging out, I know I went along with what he was saying more than I would have had I been honest: things like loving the Beastie Boys and 311 or enjoying being “out” every night at a bar. I didn’t have my own opinions on much of anything – just a lot of “Oh, that sounds great” because I wanted to continue to be liked.

Fast forward a bit of time, and I was waitressing in a local Italian restaurant near my hometown of Milwaukee. He came in to eat dinner and I was slammed – but of course, he was sat in my section. During moments of stress, a little bit of myself came out and I remember being so annoyed he would take up a table on a busy night. He sat there for what seemed like forever (a good table, too) and then near the end, he proposed to me.

Sounds cute, right? I was mortified – I was dating this person because he liked me. I was so annoyed with him at that moment – because the sitting in my section at my work on a busy night where I was trying to make enough money to pay looming bills…and then he proposes to me in public? With all my coworkers and random people around? I remember a brief moment of panic…say no, say no, I chanted in my head. This isn’t right – but the desire to be liked is strong. I said yes.

Everyone was so happy!

Everyone was so excited!

We planned a wedding in Jamaica, and…I sobbed getting my makeup and hair done. Not a few sobs – and not sobs of happiness. Full panic attack I don’t want to do this but I’m here and everyone is here and what do I do sobs.

I went through with it because could you imagine the letdown? The folks who flew there, the guy that asked me, all of the money that was spent!

Never once did I think about myself. I never once took a moment to think of whether or not this is what I wanted – then at the moment, it was, because people liking me was what I wanted. Did I know then I was just going along with whatever someone else said to be liked? Not at all.

Looking back on that marriage – and consequently, that messy divorce when passive wasn’t ok anymore – I wish that someone told me I was people-pleasing more than looking after myself.

While my situation is a bit extreme – check-in. Are you doing things for yourself AND someone else, or just for someone else? 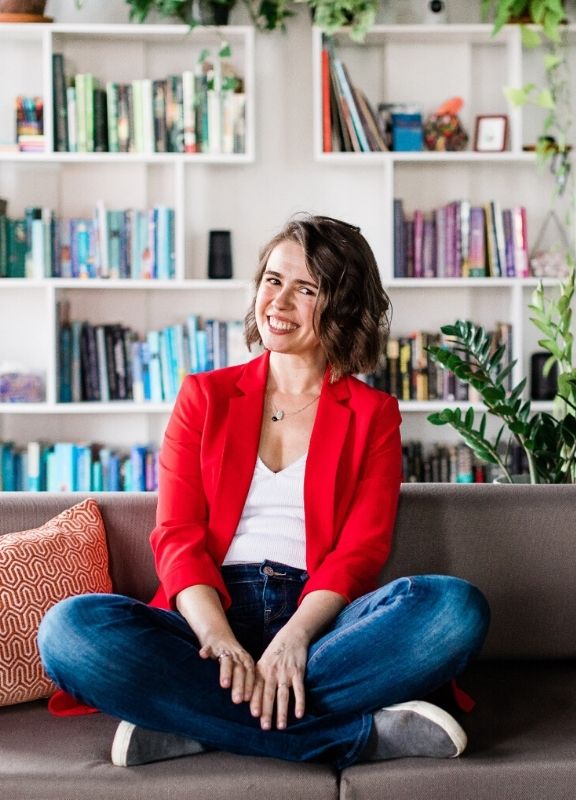 Jen Oleniczak Brown is the Founder of The Engaging Educator (EE), a women-owned and operated company dedicated to helping people find their unapologetic, authentic and best voice, communication style, and self through improv-based education and Fearless Winston Salem, a collaborative collective for and by women. Jen’s work can be found in publications like Bustle, Fast Company, Forbes and Moneyish, as well as her first self-published book Improv(e): Using Improv to Find Your Voice, Style and Self (Balboa Press, 2018) and the upcoming Think on Your Feet: Tips and Tricks to Improve Your Impromptu Communication Skills on the Job (McGraw Hill Education, November 2019) and Care and Keeping of Museum Professionals (May, 2019). A firm believer in the idea that Yes, And can change the world – so firm it’s tattooed on her arm, Jen’s personal mission is to empower as many women as possible to stop playing small and know their incredible supernova powers. She currently lives in Winston Salem, NC with her husband Alex, dog Drumstick, and about two-dozen houseplants.
View More Articles
PrevPrevious ArticleDear June: Ahead of the Curve
Next ArticleIn The SpotlightNext